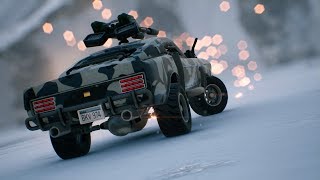 Diesel Guns is a multiplayer old-school car combat game in the Twisted Metal, interstate 76 and Vigilante 8 style. The game mechanics combines drive and fun of car combat and balance of classic shooter games.

In the game are available a lot of cars. Each car have unique abilities and characteristics of speed, armor or maneuverability. The game controls are convenient and intuitive which allows you to completely concentrate on gameplay. The arsenal of well balanced weapons includes: rockets, mines, machine guns, shotguns, mortars, harpoons, grenades, lasers, acid. What weapons the player uses may depend on the location, speed of movement or current health of the enemy etc. Each weapon has main and alternative fire mode. Alternative fire has great tactical importance: can shoot through obstacles, stop enemy car... Weapons can be combined with each other. So, for example, ten mines placed in the same place, will turn into a huge mine with a huge radius of explosion.

Cars also can be a powerful weapon ramming the enemy or producing shockwave when striking the ground. In addition to health every car uses the energy. Energy is an important resource which needed for abilities such as nitro, energy shield, jumping. The energy can be restored by damaging enemy or by constant movement of a player. All this creates unique high-speed gameplay which requires good player skills to be the winner.

In Diesel Guns, the outcome of battle depends not only on vehicles and weapons, but also on the environment. Like in the classic shooters Quake and Unreal Tournament, the player must learn the features of arena and know the location of weapons and bonuses that restore armor and energy. It is also important to monitor the radar in order to detect valuable weapons and artifacts or mega weapons which often kill in one shot. On maps are many interactive elements that can be activated by player and helps to gain an advantage in combat. For example, the giant sand worm can be called up by attaching the missing part (A) to the worm charmer (B), or to destroy the antenna to cause a meteor shower.

Also available game modes such as deathmatch in which each player fights for survival and the team match, in which two teams play against each other to get the bomb and take it to the enemy base to destroy the base.