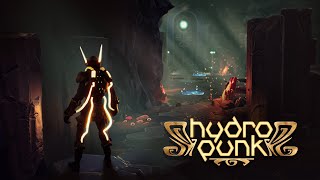 Hydropunk is an original action adventure game set in the underground world of hydro-powered machinery. Saper, a young engineer, who was raised in the golden cage, has to rescue his sister from unknown “demons” from the surface and face the real source of his city’s prosperity.

Hydropunk takes you through the story of Saper, a young talented man with an open heart, who appeared in the wrong place at the wrong time. When his sister has gone missing, Saper leaves his comfort zone and faces the real source of his city’s prosperity.

The story, told by Saper himself, witness a painful transformation and moral dilemmas, where no choice is actually given. Only fierce intellect and strive to live can help Saper to survive and rescue his sister from unknown danger from the planet’s surface.

Essentially, Hydropunk is inspired by XIX-century steam-powered machinery, but it uses hydraulic power instead of steam.

In this world human race discovered Init, a natural source of energy, before they’ve seen a first spark of fire. Light of thousands of stones and peculiar flora created a perfect environment for humanity in the infinite caves, while the planet's surface was deadly poisoned.

Nowadays, Sarder, the biggest city, is in its golden age. Gigantic constructions, neo-victorian industrial aesthetic and Art Nouveau style are hiding inner side of the world: poverty & despair of mining cities demolished by earthquakes.

The contrast between bright happy Sarder, desolated cities and poisoned surface creates the main question: “Do you know, what is the cost of your happiness?”