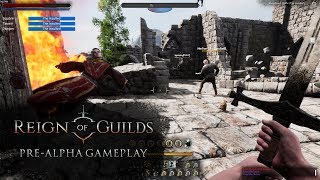 Reign of Guilds is a classic MMORPG. Dark magical middle ages: open world, castle sieges, economy and diplomacy, merchant and craft associations, churche and mercenaries, counts and of course the King. Choose your side.

In Reign of Guilds, one doesn't need to survive, build cabins, or cultivate cabbage. Here, nobody values blisters from a pickaxe or a shovel, but what considered as value are interaction skills with other players, be it either combat or diplomacy, trade or craft.

Some Guilds will go toe-to-toe in deadly battles for the lands, castles, titles, and the throne, while others will win over craft and trade markets without any bloodshed and position themselves on the same level with Counts and the King.

The King, Counts, associations, the Royal Bank, taxes, commissions, expenditure on lands and maintenance of auctions? Let's get this sorted out.